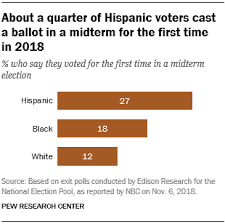 While both candidates court the Black and White vote, the deciding votes will be made by Hispanic voters. The second largest voting bloc in the U.S. (would be first if  our illegal citizens could vote, lol, just kidding, hearts are skipping beats all over the country right now). We will eventually decide who will become the next President of the U.S. in 2020 and we generally decide by how our pocket books are doing. Hispanics are notorious for not seeing that D and R in front of people’s name. The joke is that the D and R stand for,….              . Yet we go unseen, partially because of that illegal uncle living in the basement. Mostly because our votes are taken for granted. Hispanics mostly feel the economy is the biggest issue, then terrorism, then immigration, sorry tio and finally lack of opportunity and pinatas (don’t believe me, take your own poll). We believe in legal immigration, just not in the insurmountable obstacles that are needed to get achieve LAPR status, I mean why do I have to do 50 push ups and 100 sit ups and 10 pull ups on top of everything else, wasn’t scaling that 30 foot wall in under a minute good enough. So, while the emphasis is not on the Hispanic vote with the candidates, it will be felt in the voting booths as more Hispanics are flocking to the voting stations then ever before. At least we have two candidates to choose from, in Venezuela, they don’t even have voting stations. So, while the concerns if empanadas and burritos are going to become the new country past time food, they’re not, we prefer burgers, hmmmm.. empanadas and burgers, Hispanics, who can go either way with their vote, will be looking for the jalapeno’s to put on our burgers, while we choose our next President. Seriously, jalapenos on a burger are delicious and it reduces LDL’s in the blood stream as well as fight cancer causing elements, take that pickles.