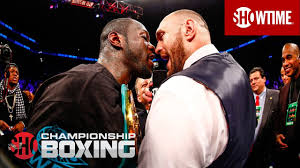 The Tuscaloosan Thrasher versus The Gypsy King, this is going to be a very interesting fight. The biggest factor in this fight is going to be the confidence of Wilder, maybe better put, the over confidence of the Tuscaloosan Tormentor. When Fury fought Klitschko, Vlad thought it was going to be an easy fight and went in there with confidence, too much confidence, and the Gypsy King taught a lesson in over estimation, Vlad’s, and why you should prepare like you are the underdog. In this fight, the more nervous one might come out triumphant. This is not an easy fight for the Tuscaloosan Tornado, you get it because of the way he swings when he gets you hurt, by any means and if he thinks he is guaranteed a victory because he is the one with the power, he could be looking at relinquishing that title. The Gypsy King’s biggest attribute is his doughy body, reminds me of Tony Tubbs, unassuming and doesn’t scream out top tier, but he is. Fury has skills that are underestimated until you get into the ring with him and you find out that he is not that easy to hit. The biggest advantage for Wilder is that he does carry that power but unless he sets up the the Furious One he isn’t going to land it unless he gets lucky. If the Tuscaloosan Terminator walks in without a game plan on how to lead the Fab Fury into that right hand, he’s going to be eating jabs all night long and lose on a decision or a late KO. Wilder has to pump that jab like it gives him $1,000 every time he throws it and watch for Fury’s reaction so he can time that Tuscaloosan Torpedo and land. For Fury, be your awkward self and never move the same way twice in a row. Keep Wilder guessing and by all that’s good and living, move to your right as much as possible or you might not be…….. good and living.

My prediction for this fight, it’s going to be electric. I say Wilder by KO in the middle rounds, just because he has been more active and fought the better opposition lately. Good luck to both combatants.