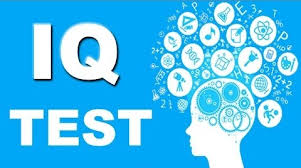 Have you ever been told that you were a dumb dumb, a slow poke, or just plain stupid because you couldn’t figure out an answer to a question or riddle or you took an IQ test and didn’t do so well or maybe you were in the bottom half of your class when it came to grades? Well, I haven’t. I always did well when it came to academia. I usually was in the top of my class and I liked it. It made me feel good but was I intelligent, not necessarily. People decided to measure intelligence by how much education you have. The questions asked on an IQ test, while not seemingly difficult, sometimes requires a person to have a certain amount of education to deduce them. I recently took a Wonderlic test, a political pundit just said that all candidates for the Presidential office should take one prior to becoming President, and I did well (I’m not running for President). I scored a 45 but I argued with my computer for 12 minutes because one of the questions that it asked was misleading. The question, “which does not belong” the answers were A. Dentist B. Optometrist C. Orthodontist D. Dental Hygienist. I chose D. Dental Hygienist, the reason was because that was the only profession where you weren’t considered a doctor as all others are considered doctors but the answer was B. Optometrist because he was the only person that didn’t deal with teeth. I argued with my computer for those 12 minutes. I berated my computer and it, like a good puppy, didn’t say a thing back. I felt bad afterwards and I gave it hug and told him that both made sense. So I unofficially raised my score to a 46. Does that make me intelligent, maybe a little crazy, but not intelligent. Let me just say that I didn’t really argue with my computer, I just looked up all the professions to make sure I was right, and I so happened to be correct…. so I raised my score. With comedians getting there jokes brought up these days and used against them, I wanted to set the record straight. The reason I bring this topic up is because so much is being made of intelligence, in the realm of educational smarts, and other qualitative factors are being ignored.

I feel intelligence or the most intelligent person on the planet is the person, that throughout his and/or her life, smiled the most, enjoyed the most and sacrificed, in terms of having to do things that they don’t feel are right, the least to get there. That is my definition of the most intelligent person on the planet. While different things make us happy; some love academia while others love the beach, while others love being in love, the tool you use to measure this, quantatively, is the amount of time you spend smiling in your life and truly enjoying yourself or being happy without having to give away your moral beliefs of what is right and wrong. I, personally, was setting a record in this. I was doing well financially without having to give up my heart felt beliefs, dated some very interesting women, married maybe the most sought after woman, not because she was the most sought after but because of her truly amazing heart, and had a child that was the funniest and happiest kid that you might have ever seen in your life, i.e. at 4 years old I dropped a dish and broke it and he looks at me and shakes his head and says “what a douche” and at 8 years old he said that he was thinking of changing religions because the constitution allows freedom of religion and yom kippur or hannukah was around the corner and he heard that you get gifts every day for 10 straight days and change back when Christmas came around. I told him he can choose whatever religion he wanted but not for the gifts.

Unfortunately my tides turned and am now actively seeking my intelligence quotient again. The point being is that I went from being one of the smartest people in the world to being, maybe, the dumbest son of a bitch alive but I didn’t get any dumber education wise, in fact, I was going to school to finish up my degree, I just simply lost what made me happy or had it taken away, however you want to look at it, it’s not there anymore. Now, I’m not sad or depressed, luckily, what internal mechanisms that I was born with allow me to handle these situations and try to find a solution on how to regain the title as the smartest person in the world. The trek hasn’t been easy as obstacles have presented themselves along the way but I seemingly have a grasp on them for now.

In articles you read, you see politicians being challenged on there intelligence but how dumb can that person be if he/she is in the position that you want. I, for one, thought that I had a better chance of hitting the lottery on the same day that I challenged Lebron James to a game of one on one while I played in a wheelchair blindfolded and winning both at the exact same time then Donald Trump had of ever being elected President. So did half of the people, the ones that didn’t vote for him, which by coincidence are the same ones that challenge his IQ, so you can reasonably assume that when you challenge the smarts of a politician you obviously voted in the other direction, so how can you challenge him on his intelligence. The challenge will come, when at the end of his Presidency in either 2020 or 2024, he says it made him the happiest man alive or it didn’t. Most Presidents say that the best day of their lives are the day they enter office and the day they leave. Everything else in between is a test of who you are as a person. I, for one, didn’t vote for President Trump, but like I have written prior, I hope he proves to be the best President in our history and the person that succeeds him, is even better, why would you want anything else, if for nothing else, for yourself and your family. That would truly be an amazing trend, not unlike those amazing cat videos that everyone posts on twitter or snap chat. I think that too much emphasis is placed on raw human intellect and not enough on conceptaulizing the problem in front of you in different ways or, simply put, using common sense to reach a solution that some people tend to over think.

Albert Einstein, long considered the smartest man to walk on this planet wasn’t even the smartest man of his era, not according to his grades. His phenom or brilliance was presented in thinking outside the box and applying a different approach to a problem when a solution couldn’t be found. Oddly enough though, everyone said that he enjoyed life to the fullest. Maybe that’s why he’s the smartest man alive.

Another good example is if you ever heard of the story of the truck that got stuck under the bridge, engineers came over and were trying to figure out how to raise the bridge when a child came over and said that maybe you can let the air out of the tires. While that may be a fable, it is long considered a tale of how intelligence, when presented in a group of similar thinkers, can actually prevent you from getting the right answer. That’s why, in politics, I feel that having someone propose an opposite idea of what the group is considering, just to see what the outcome would be, is essential in getting the right answer, which would make everyone happier, right?

A person once told me, that due to my current situation, that 90% of the people were against me and that only 10% were for me. So after I did some calculating, inversing the the sine and cosine wave tangents and measuring for probabilities and unforeseen weather events and then adding a little magic, I found out that whatever makes that 90% dumber, or unhappy, will actually increase my IQ, or happiness, exponentially.