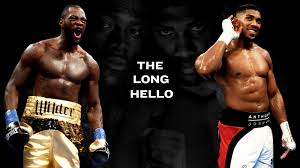 What can you say about this fight that hasn’t already been said many times by commentators, news articles, pro fighters, the promoters and the fighters themselves. On one side you have Wilder who is ready for this fight and ready to unite. His supporters are taking notice of Joshua’s promoter and manager Eddie Hearn opting to fight Povetkin instead of Wilder for the next fight. They are saying that Joshua is scared and that his own team doesn’t have the confidence in him to overcome the challenge presented from the WBC champ and his bazooka right hand. That the best way to keep the titles in England is to stay in England. My personal belief is that it was smart for Joshua to take Povetkin first. Povetkin is no push over for anyone and at 34-1 with 24 wins coming within the distance, he’s the perfect opponent to give you the tenacity and momentum to fight the best in the division. Wilder just dispatched Ortiz in impressive form and is riding the high. Hearn is trying to slow the roll of the Tuscaloosa tormentor and put his confidence of that win in the rear view mirror as long as Joshua wins his fight against the Russian, it might be a good strategy. It goes to the old saying, you’re only as good as your last fight and Joshua didn’t look exceptional against Parker while Wilder, well, he looked like a world beater. If you look at it like that, fighting Povetkin is definitely the right move.

On the other side you have Joshua supporters that say that Wilder is a one trick pony and if you take that trick away, all you have is a phony. That Wilder, with all his ballyhoo (old English for hype), is the one that doesn’t want the fight. Hearn says that all Wilder has to do is sign on the dotted line but he refuses to do it. That Wilder is more like a noise pop than a bazooka. My personal belief is that you are not going to find more one punch power in any division than the Tuscaloosan Titan and that’s one hell of a trick. That pony will take you to finish line first almost all the time. Taking out Ortiz in the manner he did, when no one else could even dent the Cuban, was definitely eye opening. Wilder is on cloud nine and deservedly so, like Joshua was after beating Wladimir by TKO. If you had asked Joshua to fight Wilder after Wladimir, he would have jumped at the chance, again, you are only as good as your last fight and that was one hell of a fight. Joshua’s confidence was through the roof and sometimes that is the determining factor. So, if Joshua disposes of Povetkin in fiery fashion, look for the his team to make the fight against Wilder.

My prediction for this fight is that the champ will win. For Wilder, it’s simple, keep your distance and work the body early and then let that Tuscaloosan Tomahawk loose to the chin. For Joshua, it’s simple, stay in his chest, don’t give him room, put your weight on him and beat him like a rag doll.

Good luck and I’m glad it’s not me in there. You must be crazy to fight either one of those behemoths.