Did you know that Healthcare insurers, such as Aetna and UnitedHealth, are currently being traded in the stock market? If you know how the stock market works, you would be flabbergasted, outraged, beside yourself in dismay and a lot of other cool little soliloquies that express some concern, hopefully. If you don’t then this is a little crash course. When a company is in the stock market there sole interest is to provide profits for their shareholders. This means that they must try and find a way to make money on you migraine. Not only migraine but cancer, diabetes, heart disease and any other illness. The best way for these stocks to thrive is by not covering you as much as before, not enrolling people that are already sick (they take away from the bottom line), have holdings in the making of the medications that help you (i.e. the pharmaceutical companies), and to play hardball negotiations with hospitals and doctors on the prices they charge to save your life. Your life is not their first concern because if you have a long lasting illness that they have to cover, then they would rather see you die, that’s a little harsh but you are a profit sucking vampire that is taking good money from their shareholders. Now, they will

never say this out loud. No, they’ll make all the nice commercials that show you healthy with their health insurance, now what sense does that make? If I’m healthy, why should I pay for health insurance? But there is a fix. A real simple one. Make it illegal for health insurers to be for profit. You should never profit on someone’s illness. The good thing is that these companies honestly want you stay healthy as possible, the bad thing is that is not reality and once you become ill, a serious illness, they want to drop you immediately or they want you to drop dead. The money that these people make is also insane. Do you know how many people you can help with 16.8 million dollars. I’m subtracting a reasonable 1 million compensation for his work as CEO of telling people no, we won’t cover that bill. There is a solution, it really is simple, ready, remove greed from the equation.

I think that as a CEO of a health insurance company, the max you should make is $150,000.00 yearly. Let’s do a little math, a company start-up business strategic plan that actually has people before profit. Let’s say you pay $200 a month in health insurance for yourself and $50 per child. Let’s say you have the average amount of children of 2.4 per household, ehhhh, in keeping with a civilized way of thinking, we won’t count the .4 child. I don’t even know what a .4 child would look like. That’s $300 monthly. Let’s say as CEO of Never Never health Insurance, I have 500 employees, including myself, making an average of $100,000 per year. That’s 50 million a year. What I rake in from healthcare fees if I had a million insurers is, let’s see, 300 times 1 million families per month times per 12 months, carry the one, where’s my calculator? It’s 3.6 billion a year. Add another cool 2.4 billion if both parents are covered. that brings us to, ehhh, where’s that calculator, 6 billion dollars. Are you telling me that I could not cover every illness for every subscriber that I have at 100% with 6 billion dollars a year? My bad, It’s actually 5.95 billion, forgot to pay my staff. Not only could I cover you, assuming that all my insured don’t 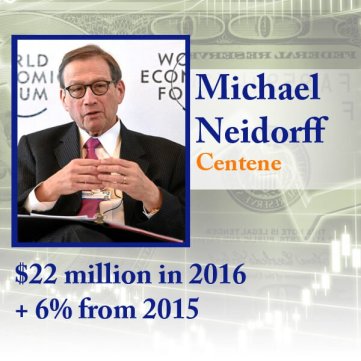 come down with a serious illness at the same time, god forbid, but, since this would be a true non profit company, as they all should be, then at the end of the year, whatever is left over in the coffers would go directly back to the consumer. And let’s say that we had a really good year where no one visited the doctor, then you would only pay $60 a year for insurance that you didn’t use. Have to account for building and miscellaneous costs. That’s $5 a month for your whole family. That’s the incentive to stay as healthy as possible, the check you get at, let’s see, $440 a month times 12 months, ehhh, seriously why do I keep misplacing my calculator, $5,280 back if we have a really good year. That’s best case scenario.

working in the Health insurance industry. No, these guys wouldn’t be able to afford yachts and fancy champagne if someone decided that healthcare is only meant to take care of people not CEO’s. And here’s the other great part, you could actually pay doctors, hospitals, nurses and all other medical professionals a little more because they are the ones that are actually helping you. If you reduce the Health Insurance companies payroll you actually increase the viability of actually getting good health insurance. Man, if someone ever decided to go ahead and start this company, 100% coverage at a minimal price, I would join it in a heartbeat.

Oh yeah, I forgot, the title of my article, well, because they both just want to rip you off, that’s why. I wonder if Bill Gates or Jeff Bezos feel like getting into the health insurance business, won’t make much money on the insurance company but I would buy there other products and their products only because I sure as hell wouldn’t want them to go out of business.