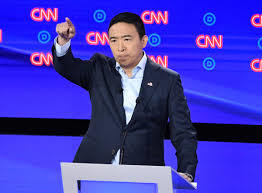 As Andrew Yang closes out his bid for the Presidency, he will be sorely missed. As one of the few voices that had true insight and didn’t just blame his opponent for everything, Andrew showed something that is completely rare in the days of high tech gadgetry, common sense. It’s funny that common sense is as rare these days as a solar eclipse. Mr. Yang should not put his head down. He outlasted several highly regarded contenders, all by seeing the problem for what it is and finding practical solutions. If I were the top three candidates, I would be seeking Mr. Yang’s endorsement because, even though he didn’t get the nod, he has shown that he has the right answers. And if I were Mr. Yang, I wouldn’t just give his endorsement to just anyone but the person he truly feels will make the best candidate. A lot of people will be watching to see who he chooses.