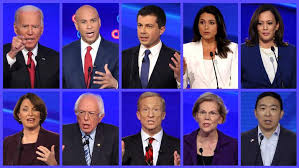 I agree with some of the commentary and disagree with other parts. My takeaways are that Sen. Sanders is still the most relatable candidate in the Democratic field. His mix of humor and hard nosed policy decisions stand out. Sanders is spry, quick witted and seemingly a good decision maker. The one thing that voters look at is his age. As unfair as it is, and it is, people look at his ability to do two terms as President. I, for one, don’t have a problem with it.

Mayor Pete came under the most scrutiny by his counterparts but not only did I think he handed it well, I think he got the better of the conversation. When Klobuchar challenged his credentials, he hit back by saying that you’re complaining about how things are going on in Washington but that’s where you work. When Gabbard challenged him on his readiness and judgement, Mayor Pete, well, to put it simple, he called bullshit on what she was alluding to. Mayor Buttigieg is 38 but he, along with Sen Booker, is a Rhodes Scholar, what does that mean exactly,

Mr. Rhodes’ Will contains four criteria by which prospective Rhodes Scholars are to be selected:

Only 32 people from the U.S. get selected yearly, so there is a great honor in it. There is a certain vigorous rigor that goes into qualifying for such a prestigious honor. Mayor Pete also served in Afghanistan, as an intelligence officer, and he was elected as Mayor of South Bend, Indiana, which has a population of over 100,000 people. He is young in comparison to other candidates and past Presidents. Theodore Roosevelt, 42 when he took office, was a year younger than JFK when he took office, who was 3 years younger than Bill Clinton when he took office. You might have to be a Rhodes Scholar just to understand this paragraph. All were good Presidents, Teddy being the sole Republican but maybe the best of the bunch. Bill Clinton was also a Rhodes Scholar and the last President to actually balance the budget. My point here is, out of all the Presidents, the younger guys did pretty dam good. Oddly, my two favorite candidates are the youngest and the oldest in the field.

It doesn’t mean I’ll vote for them, I’m independent, I haven’t decided yet. President Trump still has a way to go before his term is up and he has to campaign but I am of the reasoning that if you put the two best people forward from their respective parties, the country can’t go wrong. Only one party has that distinction of nominating a person this time around and that’s the Demo’s, the Repub’s have an incumbent.

Sen. Harris might be the smartest person in the field of candidates. She has unequivocal logic and reasoning. Sen. Harris makes points that you can’t help but agree with because you know she is right. The senator’s problem is if it resonates with the voters and their nostalgia of what seems to be a really good President in President Obama, which seems to be leaning towards former Vice-President Biden. Her other problems were the shellacking she took from Gabbard the first time around, and I hate to say it, but the fact that she is a …well … a she. I want a female President. I want to know the difference in managing styles. It may be the best kept secret on how good a female President is or can be but there is this male hysteria that, whether we want to admit or not, makes people hesitant. People fear the unknown, they like to play it safe, it’s a natural human response. Fear is a powerful weapon. Sen. Harris has to be strong, authoritative and be a woman at the same time, not that women can’t be strong and authoritative, I’m just talking about the stigma or biases that we hold in this society. It’s completely unfair. She figuratively has to punch you in the nose and make you feel wanted at the same time. All her male counterparts have to do is… talk. If she raises her voice, people label her an angry woman or on that time of the month, if her male counterparts raise their voice, their labeled enthusiastic, committed or passionate. If she corrects you, she is labeled a know it all, if her male counterparts correct you, their labeled intelligent, at least that’s the way some people see it. Those are the biases that are holding this country back from electing a woman president.

One point I would like to make is that over 72 thousand people died from illicit drugs last year. That’s from overdoses to homicides to other factors. That’s more than all terrorist attacks on U.S. soil, I think. If you get rid of the cartels, you get rid of a lot of what is wrong on this hemisphere. If you had an idea to try and pressure and persuade Mexico to man (woman) up and that included using military factors, then, by all means, what is the military for if not to combat foreign entities of any kind to stop killing our citizens. It would also reduce other monetary and pecuniary obligations like rehab centers and prisons. Also seizing the cartels monies would be a pretty good windfall. I’m not sure what international law and foreign policy is but it should include stopping the flow of drugs in a more permanent way instead of playing the gopher pop up game. Take one cartel leader in and another pops up.

I also think Congresswoman Gabbard gets a raw deal and that Yang should get more time to speak. Yang seems like the real deal but his talk time is limited. Funny enough, it might just work out in his favor.