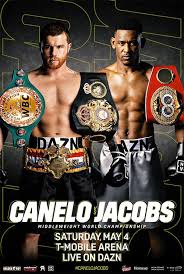 This was an amazing fight. I watched the fight again to make sure I was not mistaken. It comes down to the 11th round. If you gave Jacobs the 11th, then Jacobs won the fight, if you gave Canelo the 11th, then it was a draw. Jacobs didn’t lose but he is from New York, where getting robbed is a daily occurrence. Some notes from this fight. Jacobs can wallop but you’re not knocking down a concrete wall, and Canelo is as tough as the wall Trump wants to build. If you put a bunch of Canelos on the southern border you wouldn’t be able to get a tank through. That guy has a Thanos chin. Jacob’s shots were thudding, at least that’s what it sounded like but when you hit a concrete wall, that’s the sounds you are going to get. It was close but Jacobs clearly won 6 rounds. The 9 – 3 combo couldn’t miss. That’s the left hook to the body and then back to the head. Every time he through it, they landed. But god damn, what is Canelo’s head made of? It was an amazing fight, I had it a draw.

I am reading that some people found this fight boring. I thought it was a great fight. The difference in the top three middle weights is so minimal that either one can win on any given night. Breaking down the fight

Round 1 – Jacobs (close but clearly)

There’s people that were giving the early rounds to Canelo, They were wrong. Jacobs was the clear winner of the first two. There was a close round somewhere in there, I think it was the 4th or 6th that could have gone either way but I gave it to Canelo because the man rarely takes a step backwards. I thought the DAZN announcers were pretty good but I think that they were confused on which one was Canelo and which one was Jacobs because their scorecard might have been almost opposite of mine. I think they gave the 8th to Jacobs which might have been Canelo’s best round. I see a huge problem with DAZN taking over boxing and protecting their fighters on close fights.