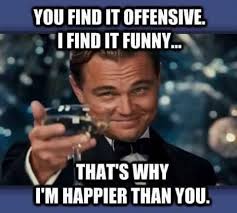 Inappropriate jokes are just inappropriate and not sexual molestation, it shouldn’t damn you to hell. Inappropriate touching is when you start the barter system, you touched my crotch, my fist touched your eye, albeit at a way faster and forceful nature. I don’t think anyone should be outcasted for being a little familiar, as long as it isn’t serial, you know, every time we speak, but I am a firm believer of reminding someone that your hands are meant to scratch your crotch not anyone else’s the first time it happens. #FOREVER