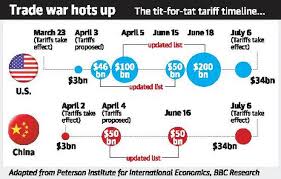 So free trade has become costly, an oxymoron from the beginning as it was never really free. The way things are heating up, it’s making political pundits blood boil. Hahaha, get it, heating up, blood boil, it’s a pun, it might not be a pun, I am not good at labeling these phrases, it might be a metaphor or a simile but it’s something. Well, starting a war with everyone, whether it be on free trade or military or even a game of rock paper scissors isn’t any good because you will eventually lose, just ask Germany how their game of real life Risk went back in the 40’s. If you ignore history you are doomed to repeat it. So, with all the great minds out there, why can’t we find a simple solution. Maybe the problem is because it should be a simple solution and we like our things complicated, from our coffee; can I have a double espresso non-fat soy latte with a hint of non-dairy cream, oh yeah, hold the straw, that’s the new complication; to the way we handle, uhhhh, wait, I’m thinking of something, hmmmm, ok, our trade wars. Why can’t we just live on love alone, I think that’s a song, but since we can’t and we need greenbacks to get us through our day, we need to find a solution to a problem that might be a problem that can create a bigger problem. Looking back at that sentence I see that there are a lot of problems. That’s a pun, I think.

I always thought that we should charge a docking tax, wait, not tax, fee for those countries that don’t pay a fair minimum wage. The problem with countries that don’t pay a fair and substantial minimum wage is that their people are quieted, not like in a hush I’m watching a movie sense but in a can’t complain about being hurt or hungry sense, and living in cramped conditions and they make other countries, that do the right thing by their employees, lifes’ difficult and they get all the manufacturing jobs because CEO manufacturers are greedy. They like the greenbacks but don’t like to share, these are the same people that kept the good tasting crayons all to themselves in kindergarten, just bad people. So, to even the playing field, without creating a tariff war, you unilaterally agree with all the countries, that pay a fair minimum wage, about this disparity and then you charge a fee, don’t call it a tax, by god don’t call it a tax, and you charge them a crap load until they raise their minimum wage. This fee would come from the importing country and not from tariffs on the products, making it separate is essential because the fee would be assessed from the amount the products are going to sell for, so if they raise their price to pay for the fee they also raise the fee and if they lower the price they sell for, then they lower their fee. This would eventually even the playing field, somewhat.

To me it makes sense, but again I just saw the Easter bunny hopping by last Sunday, I guess he could have been a regular rabbit, but I’m going with Easter Bunny and he was carrying a bottle of whiskey, an empty bottle of whiskey, ok, it was me in a rabbit costume. Jesus, you believe anything when you are drunk, it isn’t Halloween yet. Again, my Economics degree comes from crayola or it would have if that future CEO bastard hadn’t ate my crayon, so don’t take my advice but you can take this rabbit costume, it just gets me into trouble.

Note: In an earlier blog I stated that a Trade War would turn alright for the U.S., I was wrong. I thought that the trade war would be for equalizing pay around the world, it wasn’t. Since I am a blogger and I hold a degree in not holding a degree, I can be wrong about things and still write about them because I don’t influence policy and if I did influence national policy, then first; where the hell is may paycheck and second; don’t send me a paycheck because I’m pretty sure I’m going to fuck it up. Economics is a difficult thing to understand. If it wasn’t, there would be a consensus among the people that do hold those degrees on what to do. I have an opinion, and that’s it, I also don’t go hopping around bar hopping in a bunny costume on Halloween……. anymore…… hahaha, never did, I wear a fat bastard outfit. But now that I think about it, bunny costume, bar hopping, kind of goes hand and hand.