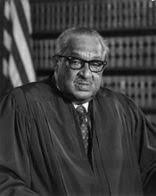 rebels at the thought of

Thurgood Marshall was an American lawyer, serving as Associate Justice of the Supreme Court of the United States from October 1967 until October 1991. Marshall was the Court’s 96th justice and its first African-American justice.