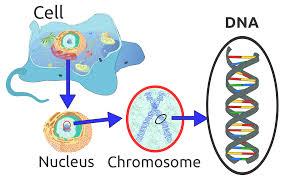 DNA or deoxyribonucleic acid codes for your genetic make-up. There are lots of facts about DNA, but here are 10 that are particularly interesting, important, or fun.
Even though it codes for all the information that makes up an organism, DNA is built using only four building blocks, the nucleotides adenine, guanine, thymine, and cytosine.

Every human being shares 99% of their DNA with every other human.

If you put all the DNA molecules in your body end to end, the DNA would reach from the Earth to the Sun and back over 600 times (100 trillion times six feet divided by 92 million miles).

You have 98% of your DNA in common with a chimpanzee.

If you could type 60 words per minute, eight hours a day, it would take approximately 50 years to type the human genome.

DNA is a fragile molecule. About a thousand times a day, something happens to it to cause errors. This could include errors during transcription, damage from ultraviolet light, or any of a host of other activities. There are many repair mechanisms, but some damage isn’t repaired. This means you carry mutations! Some of the mutations cause no harm, a few are helpful, while others can cause diseases, such as cancer.

Scientists at Cambridge University believe humans have DNA in common with the mud worm and that it is the closest invertebrate genetic relative to us. In other words, you have more in common, genetically speaking, with a mud worm than you do with a spider or octopus or cockroach.

Friedrich Miescher discovered DNA in 1869, although scientists did not understand DNA was the genetic material in cells until 1943. Prior to that time, it was widely believe that proteins stored genetic information.